Even though traveling to far-flung destinations feels a little aspirational right now, there’s nothing more exciting on a quiet day at home than fantasizing about some new and fascinating locale. America’s national parks have awe-inspiring scenery and features in spades, but there’s more to them than just Yellowstone, Yosemite, and the Grand Canyon. Grab your hiking boots (or your swim fins, if you’d prefer) and come along on a tour of four of America’s lesser-known national parks!

The first thing you’ll notice about Katmai National Park in Alaska is its incredible size — almost 6,400 square miles (that’s larger than the entire state of Connecticut!)

Katmai’s main claim to fame, however, is its bears. Picture the iconic image of Alaskan wilderness–you’re probably thinking of a grizzly bear, jaws stretched wide to catch a leaping salmon, right? Katmai is the place to see that! The park’s visitor center has multiple bear-watching stations, and park rangers take great care to make sure that the local bears stay completely unafraid of humans, so they can be viewed up close. Katmai is also home to the contestants of the wildly popular Fat Bear Week competition, so you can go and catch a glimpse of those incredible chunks yourself.

Calling all amateur spelunkers! While there’s plenty of gorgeous Guadalupe Mountain scenery at Carlsbad Caverns National Park in New Mexico, the biggest attraction is hidden away underground. The Carlsbad Caverns play host to the largest cave system in North America.

The incredible sites above are matched by the stunning sites below. The movement of mineral-rich water over millions of years has resulted in a cave that gleams with gypsum (a type of crystal), sporting beautiful stalactites, stalagmites, and pillars that give the place the effect of an eerie, underground forest. Points of interest include the Big Room, the largest single cave chamber in North America, and the Hall of the White Giant, an enormous white stalagmite that is a popular tourist destination. Visitors are free to get as rugged as they’d like exploring Carlsbad, with access points at the cave’s natural entrance as well as an elevator available at the visitor’s center.

Located in South Dakota. Badlands National Park is probably the most famous on this list. Still, it’s an underrated spot compared to icons like Yosemite and Yellowstone, and there’s plenty of hidden treasure to be found within its arid landscape.

That’s quite literal, by the way–the Badlands are one of the most important places in America for paleontologists, with an abundance of fossils dating back to prehistoric times. Perhaps the Badlands’ most famous former inhabitant is Sue, the world’s largest and most complete T-rex skeleton, but a diverse range of other species can be found there as well. More common than dinosaurs are later fossils, including ancient alligators, horses, and rhinos. Many fossil discoveries in the Badlands are made by everyday visitors — maybe you’ll be the one to make the next big find!

The Badlands’ biodiversity isn’t confined to the past, however. Living animals that can be seen there include bighorn sheep, porcupines, and foxes, as well as endangered animals like black-footed ferrets and bison.

Even then, that’s not all there is to see. Perhaps the most awe-inspiring view at the Badlands are the rock formations themselves, with thousands of hills and canyons of beautiful banded rock. Anywhere you look, there’s bound to be something wonderful waiting in the Badlands! 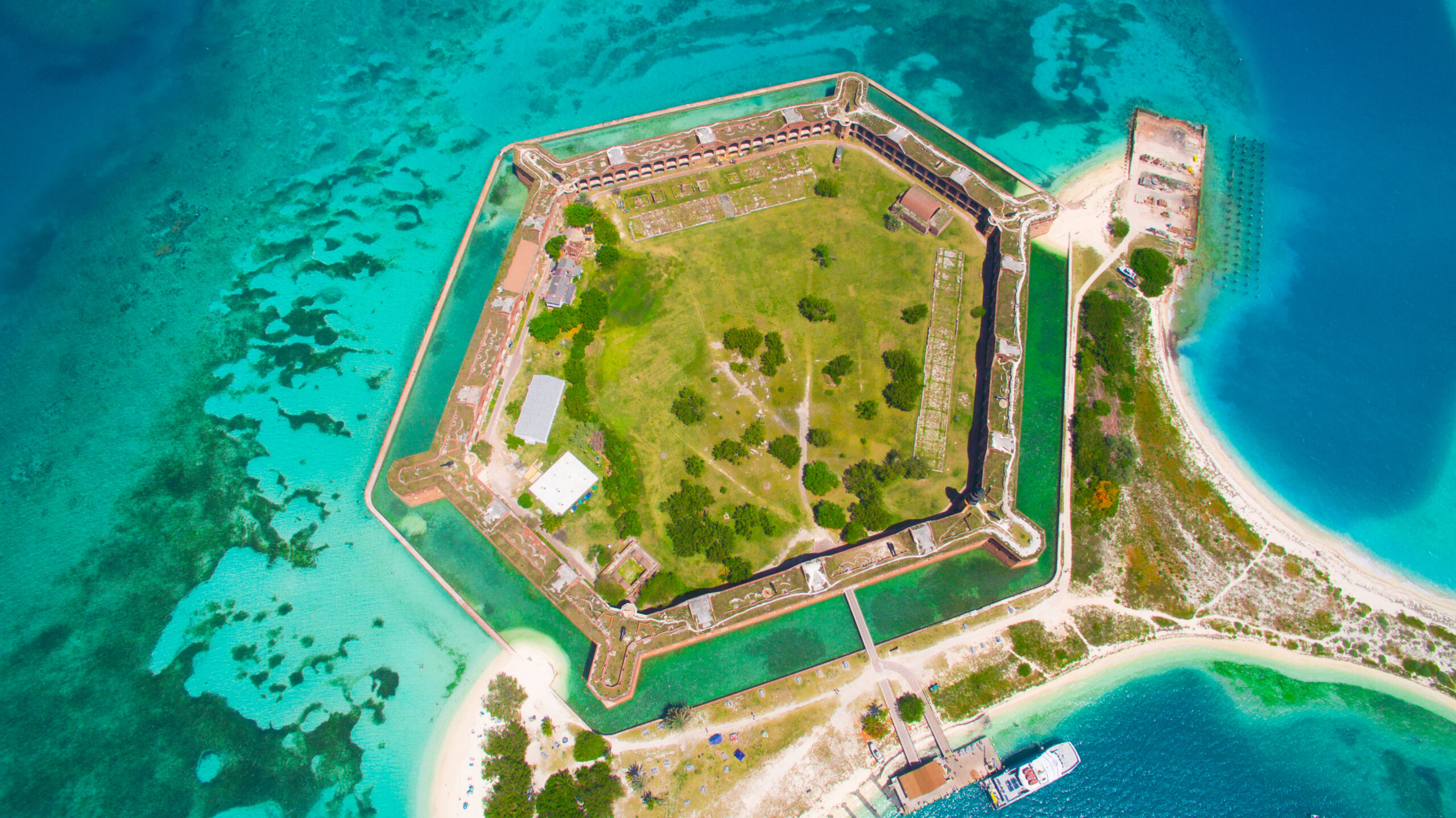 Dry Tortugas National Park in Florida is the only entry on this list that has just as many man-made attractions as natural ones–the yet-unfinished Fort Jefferson there sports over sixteen million bricks, making it the largest masonry structure on this side of the globe. Shipwrecks can also be viewed off the coast, and both are fantastic sights to see for Civil War buffs.

But that’s not all, not by a long shot. Perhaps the jewel in Dry Tortugas’ crown is its coral reef, one of the most pristine in the Key West area. It’s a motherlode of natural beauty for both boat tours and snorkelers, in addition to being vitally important to local ecologists.

Above the waves, the Dry Tortugas is also a noted destination for birdwatchers, with approximately 300 species of birds making regular visits to the islands. While only a small fraction of these species actually nest there, springtime provides a wonderful opportunity to see a wide variety of birds. It isn’t just seabirds, either–while pelicans and boobies can be viewed there, there’s also a wide variety of raptors and songbirds to be seen.

Though the focus usually remains on the most popular national parks, the National Park Service has something to offer for everyone–explorers, casual tourists, historians, and armchair archaeologists. America is positively studded with beautiful views and fascinating places–why not see them for yourself?